12/10/2016
We left New Orleans! I say that with enthusiasm because it was such a wonderful, beautiful, and lively place that I was slightly concerned we’d never leave 🙂 Kyle and I were planning on just staying for one night…then it turned into two and before we knew it we had been there almost a week. Having just the most awesome time and meeting new friends the days passed quickly. We also got 2 full days of work and made some money helping with house projects which was a nice boost for the last two weeks of our trip. We both have fallen in love with the community, music, art, and aliveness of the area and both know we will be back to stay for much longer in the future. Therefore when we found out we finally had a couple days of sunshine we said goodbye to the people, music, and city of NOLA. I already miss the music which seems to constantly play in the house we were staying in or just out on the streets. Kyle commented this morning that the Ninth Ward, where we spent a lot of our time, was just so wonderful because it was so alive- music, people, drama, dogs, kids, bikes, neighbors out and about- no matter what time of the day or day of the week. Anyway, time to let that place go for now and enjoy the beauty of where I am right now!

We left around 10am and pedaled about 40 miles to Pearlington, MS. The day was chilly due to the North wind, but the sky blue and the sun shining we didn’t seem to mind. Getting out of New Orleans was a pain and we got lost near a railroad yard and accidentally took a private road- oops. But the people were friendly and gave us directions to Highway 90 which is where we’d spend the remainder of our day. I know that highway and bicycle doesn’t sound very inviting, but it was actually great! I-10 is a major freeway which runs parallel with 90 so most of the traffic was on the freeway. Also the shoulder was huge and there were 2 lanes going both directions so sometimes we’d just take a lane if the shoulder got too small. The ride was filled with gorgeous views, lots of bridges which gave even better views, and a road surrounded by a wildlife preserve and some “camps” (fancy cabins on stilts near the marsh people use as hunting/fishing/vacationing camps). Mid-day brought us to a rather steep bridge to cross over Lake St. Catherine. Pedaling real hard we made it to the top and observed the water around us. In the far distance, 25 miles away, we could see the faded outline of New Orleans. I absolutely love pedaling up-hill- the challenge, the burn, the work is something I crave. Kyle, on the other hand, does not feel the same way. He does, however, love the downhill- my least favorite! Haha this always causes some laughter and joking disagreements as I beg Kyle to go really slow down the hill- the only time I wish I had control of the brakes! 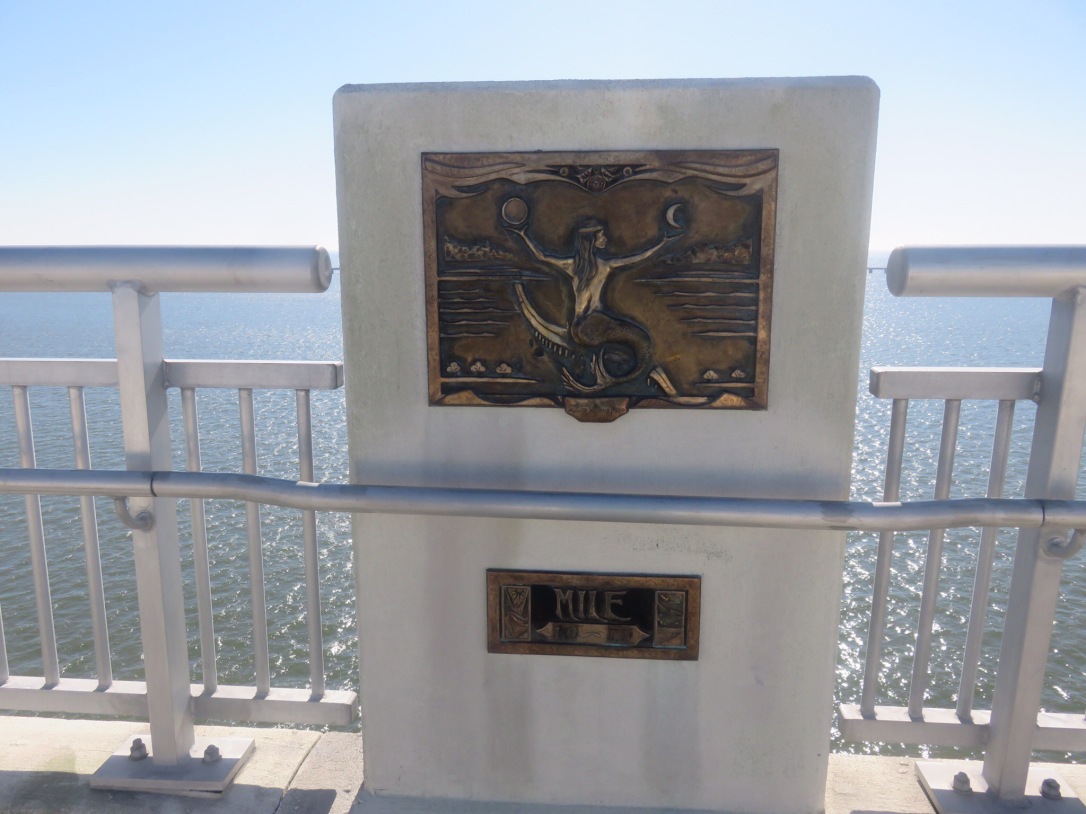 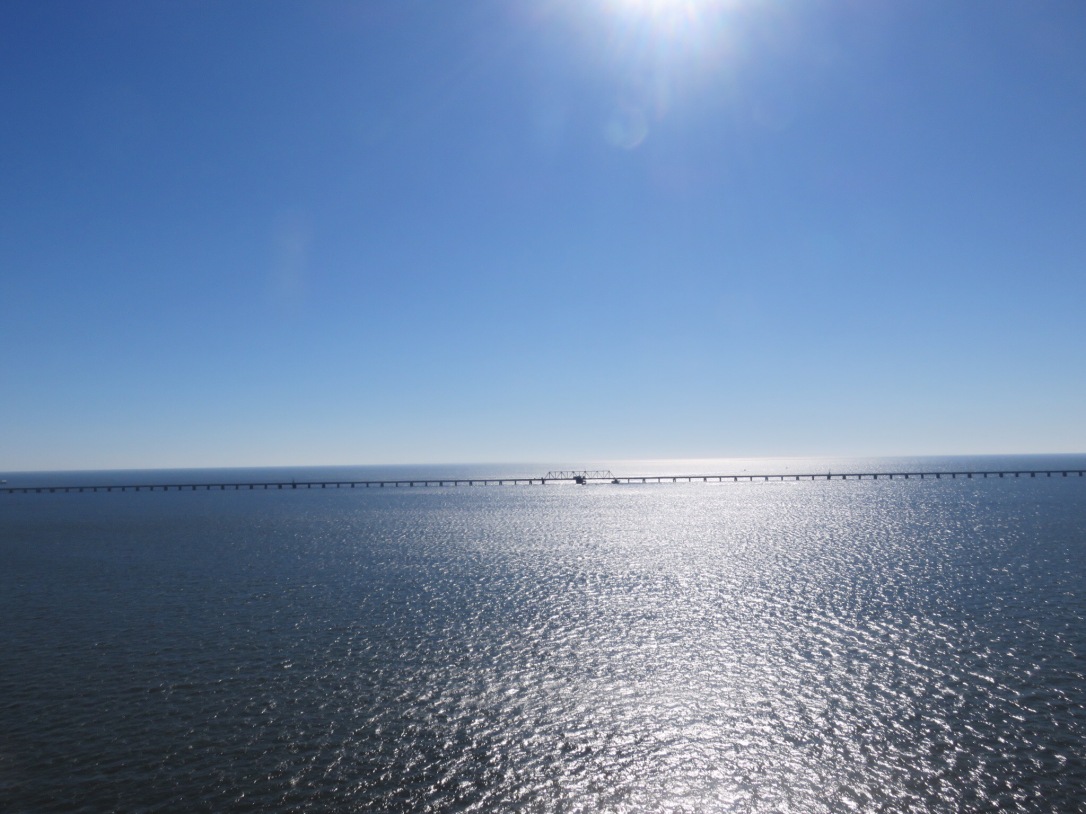 Taking lots of breaks we enjoyed a leisure pace for the day and were happy when we saw signs for the Pearl River- not only were we done for the day, but also crossed the LA/MS border- one state closer to Florida! I used Google to find a Fire Station as they usually either allow camping on their lawn or have suggestions on free camping. Kyle hopped off the bike and knocked on the chief’s door. A woman answered and suggested we head down to the boat launch near the Pearl River as we can camp overnight there. Saying our thank you’s we biked the quarter mile and were greeted by a marvelous spot along the river.

A dock, grass, trees, and a sun preparing to decent below the low marsh across from the river. Sparrows wisp across the water’s surface and I find myself sitting on a bench on the end of the dock. A great blue heron stalks slowly in the marshes to my right and the surrounding trees are still in the crisp air. As the sun sinks below the marsh the sky enlightens in that familiar orange glow we experienced in the Gulf of Mexico. I sigh as I think about Solvi and how much we miss her and all the adventures she brought us. But then I remind myself about Daisy (that’s what we named our tandem bicycle-Thanks Rick!) and feel grateful that I still get to experience the glowing orange sky after a long day of adventuring. As we finish cooking our dinner over our small camp stove on the dock, the sunset continues to amaze us as the colors get more vivid. A jet airplane flies high above and even the trail it leaves behind is pink- creating artwork against the pale sky. The trees across the river have lost their color as it gets darker and have become black silhouettes against an orange horizon. Kyle grabs my hand and squeezes hard as I look up and smile at him observing his blue eyes gazing at me from behind his yellow hat, gray rain jacket hood, and full beard- life sure is good. 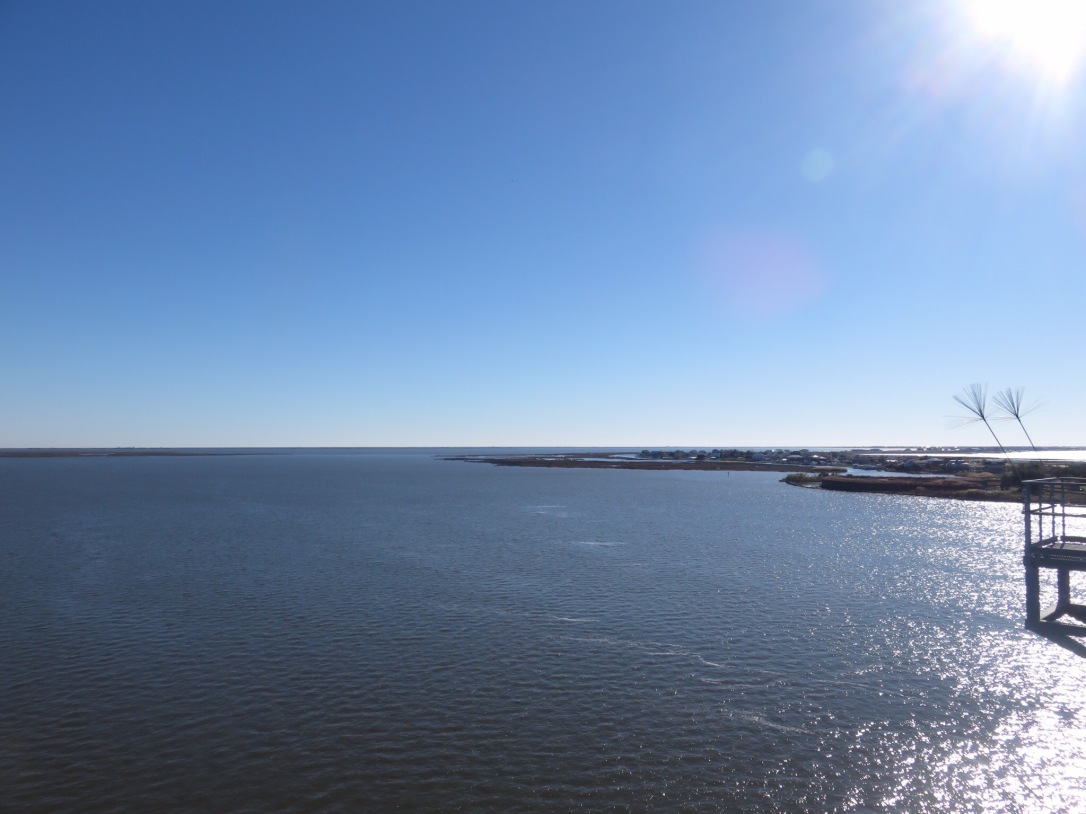 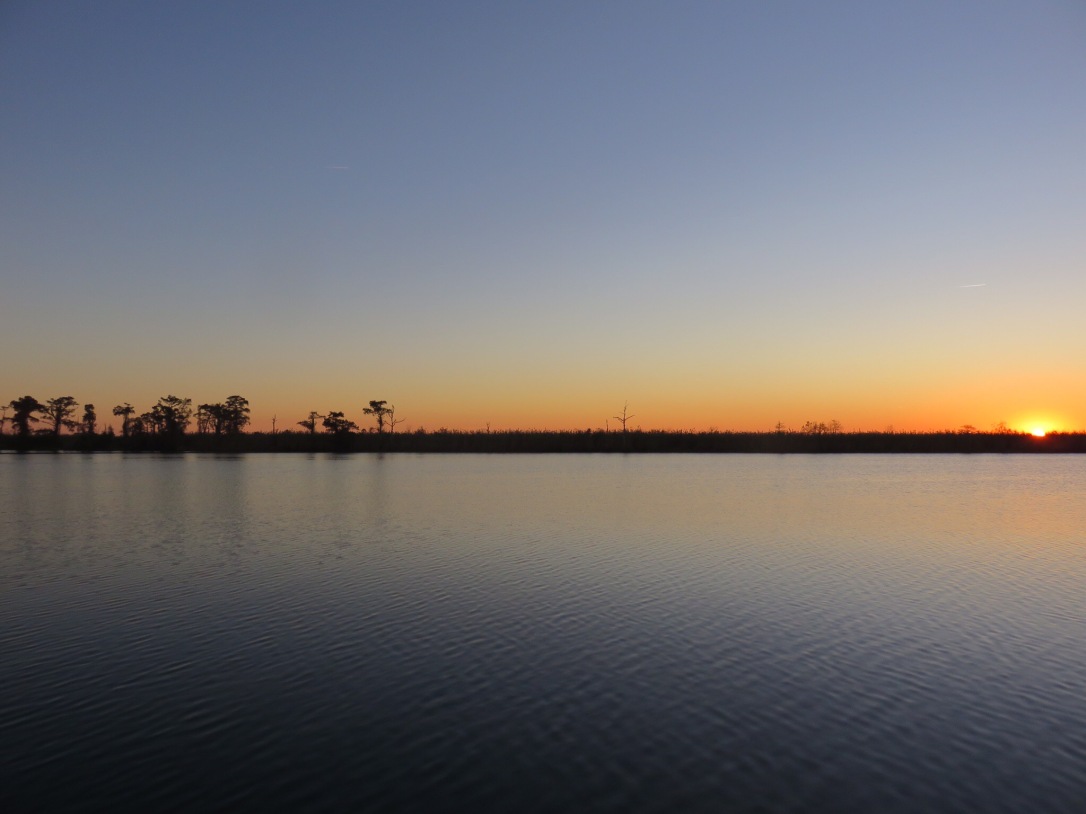 Today was an awesome day! I am sure finding this biking thing to be fun and rewarding- this morning I tried to convince Kyle that our next adventure should be from FL to CA on a bike…he suggested a motorcycle haha! Anyway, last night the temperatures were about 33 degrees and it was really cold so we were both thrilled when the sun came up this morning. Making breakfast and packing up the bike we were underway around 8:30am. We pedaled on Highway 90 for a bit before taking a right onto Lower Bay Road. The road was quite beautiful and we had it mostly to ourselves. Surrounded completely by tall pines and dense forest we pedaled along as the road winded and turned until eventually it led us directly to the Gulf! Again, for the second time, we were re-United with the small ocean. And not only were we able to see the Gulf, but the 26 miles left in our day was spent on a paved path 10-50ft from the lapping salt water. Despite it being windy and a bit nippy while riding, it was a gorgeous sunny day. I found myself in such a good mood that for about 45 minutes I made a point to very enthusiastically wave and smile at every car heading the opposite direction. Being that the road parallel to the paved bike path was only 25mph most everyone saw me and I think that all but the ones looking down at their phones waved back! I had a couple of people really smiling and a few laughed really hard. It was marvelous! Getting complete strangers to smile so big was real rewarding, which only increased my good mood. Soon I was laughing and singing and having a good old time on the back of the bike. And yes, I was still pedaling! 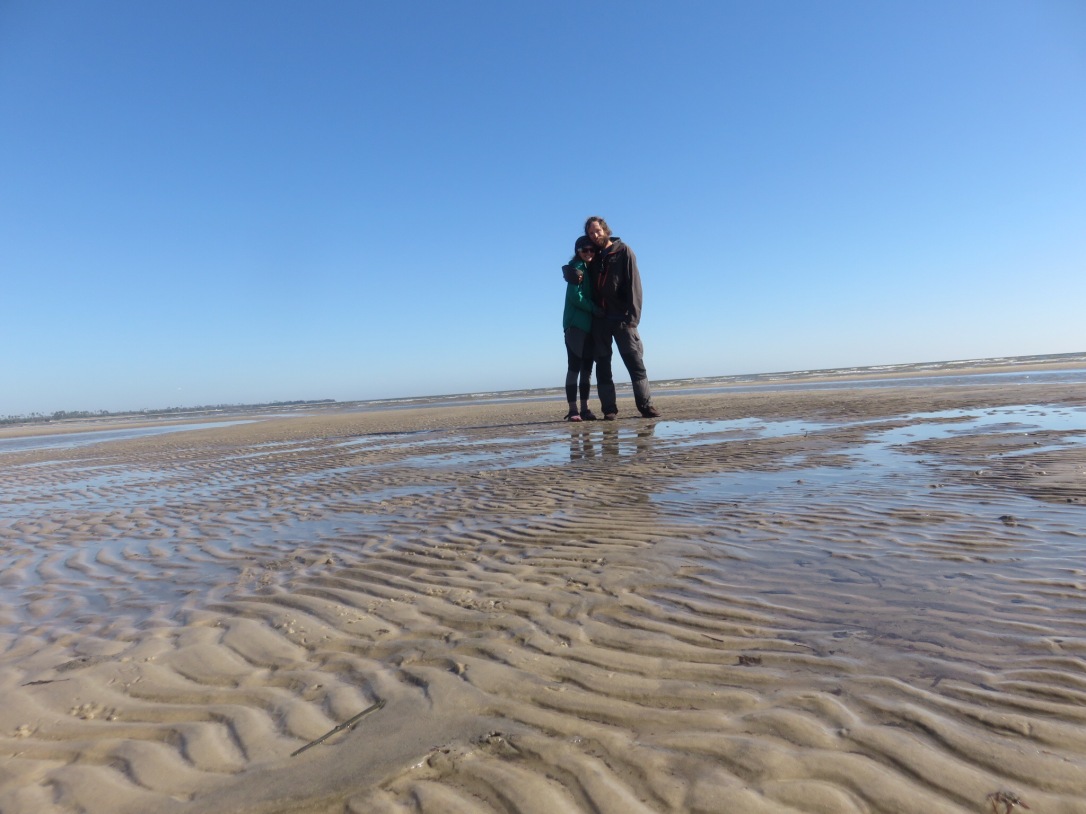 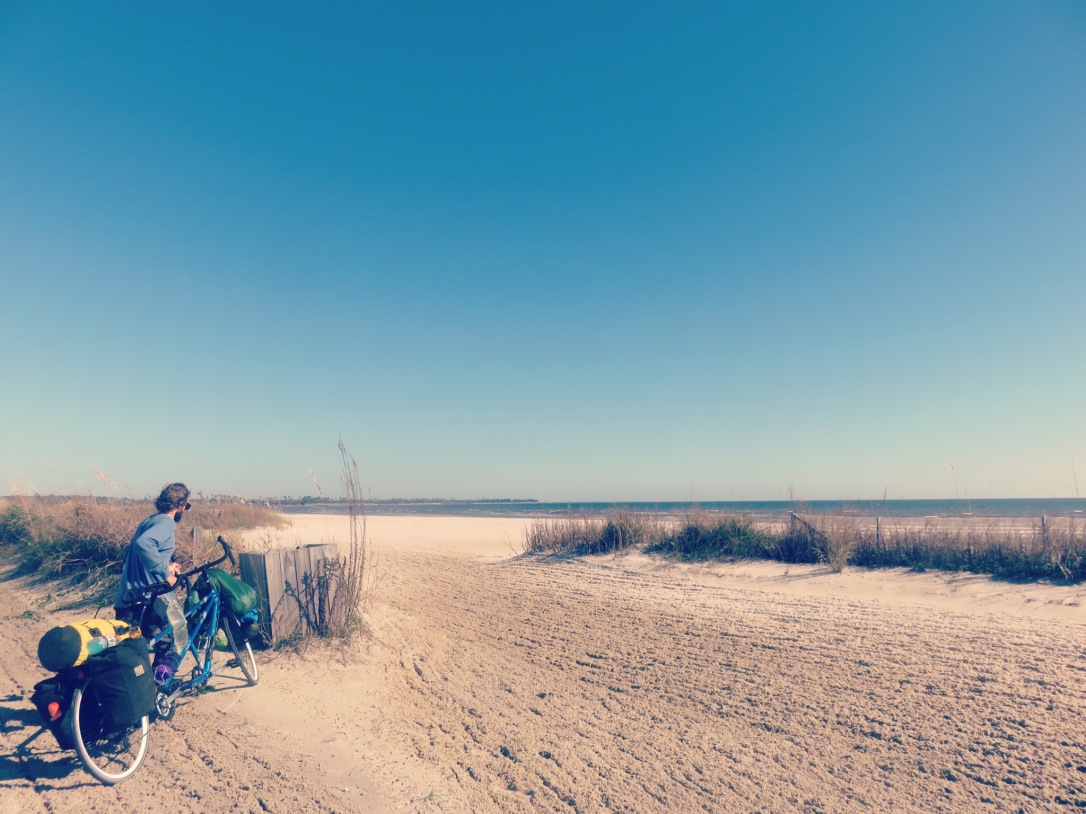 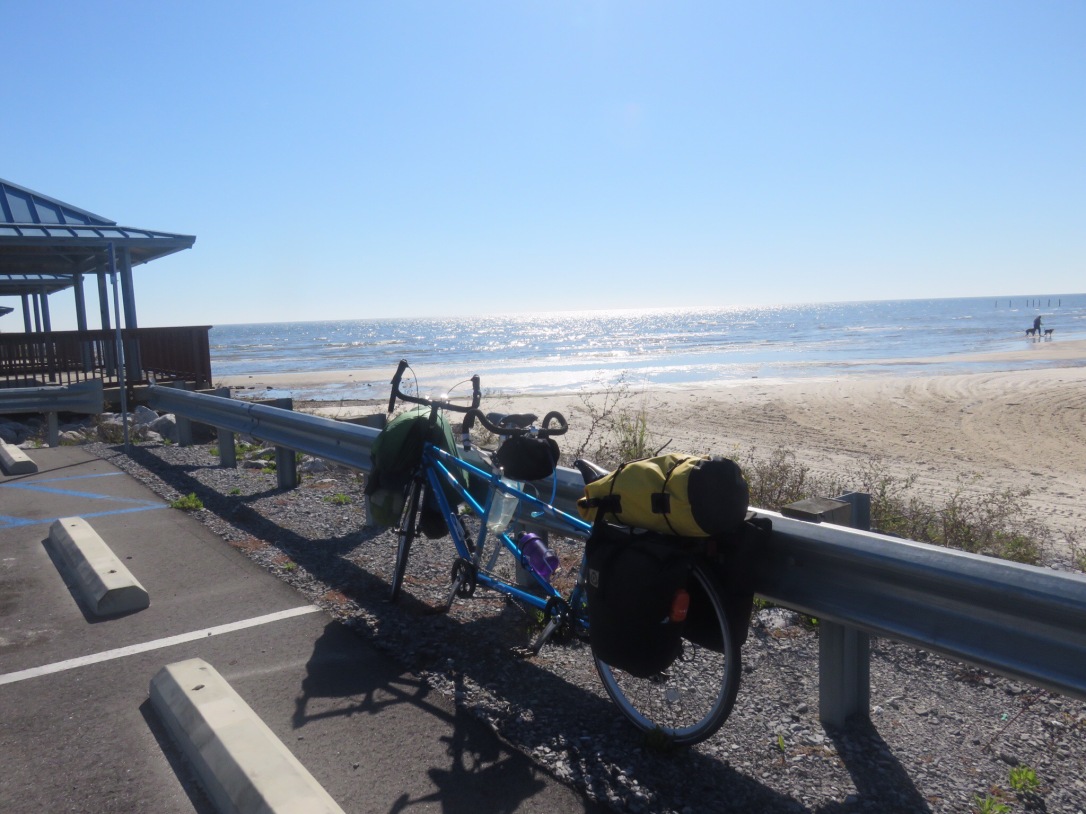 Around 12pm we arrived at a 2 mile bridge going over the open Gulf. There was a big separate section for pedestrians and bikes which we really appreciated. Thank you to the town’s of Waveland, Bay of St. Louis, Pass Christian, Gulfport, and Ocean Springs for being so bike friendly! These small towns right on the coast were cute and had wonderful little communities- I had never known they existed! Eventually the paved bike path ended and we took lots of neighborhood roads to get to our destination of Gulfport, MS. As usual the last 5-10 miles were long and difficult and we weren’t finding anywhere to camp. Using Google we headed to an RV campground, but it was closed. So we pedaled a couple more miles to the Gulfport Fire Station #2 and asked if they had any suggestions. I rang the doorbell and was greeted by 2 very friendly firemen who, when I asked if they knew where we could camp, pointed to the small fenced in yard connected to the fire station. Awesome. Kyle and I were both exhausted and the idea of pedaling to the cheap motel we were going to use as a last resort did not sound appealing. We set up our tent and made some dinner in the grass while the sun went down. I walked towards the garage where the fires trucks are kept to use the restroom and met a couple more firemen. We all chatted and laughed for a while about Kyle and I’s journey. As always, I was marveled at the kindness and safe free place to stay.

The next morning around 7am as Kyle and I were finishing packing up, more firemen started showing up while the ones we had met the night before were packing up to leave. Shift change. A fireman named Keith came to greet us in the back and was just so thrilled about our adventure. He thought it was just so cool we were out seeing the world and asked a plethora of questions. He then gave us a tour of the station and showed us all the different areas where the firemen hang out and what their days consist of. We had a great time chatting with him and I really appreciated the tour. Right before we left he sent us off with some cold water and snicker bars for a snack. Kyle and I both felt very grateful to have met the firemen and Keith said he felt grateful to have met us. It’s a wonderful world when such simple interactions are so impactful. Thank you so incredibly much to all the firemen at the Gulfport Firestation #2- not just for our kindness to us but for your service to the community! We will continue to pay it forward as we travel on.