5/6/2017Well it’s been a few days since I’ve had the chance to sit down and type, so I’ll do a quick update! We left Providencia, Columbia last Thursday and arrived in Colon, Panama 50 hours later. While the boat was traveling fast and happy, it was not a very fun voyage. The boat was wet, hot, and for some reason I just really was not enjoying being underway. Waves kept coming up from the bow and crashing into the cockpit causing whoever was steering, or in my case sleeping on the cockpit bench, to get absolutely drenched. A couple times we thought the conditions had calmed down enough to open hatches, and when we’d hit a wave buckets of salt water would pour into the cabin. I can’t really put an exact reason why, but it seemed as though crew moral was somewhat low, mine particularly, and I just couldn’t wait until we arrived in Colon. I didn’t feel very good most of the passage, but never did get sick. Was just sort of in this in between feeling of malaise. Anyway! As always spotting land for the firs time in a day or two instantly boosted moral and two hours after arriving at the marina all the hardships and discomforts faded away.

Around 4:30am on Saturday Mark was on shift and yelled down to Max and Kyle to wake up and come up on deck. “It’s like the Spanish Armada out here!” He joked. I was asleep in the cockpit and when I sat up I gasped in surprise. When I got off shift just 2 hours earlier there was not a light to be seen, and no evidence of land being nearby. But when I sat up the entire horizon in front of us was glowing with lights of various strengths, colors, and sizes. We were sailing towards the big ship anchorage and the break water leading into Colon. Mark captured some of it on camera, but the photos below don’t really do the scale of everything justice.

After hailing the port captain and the marina on the radio we were given instructions on where to enter. There was a large cruise ship behind us called the “Disney Princess” and it was rather entertaining sailing into the channel in front of such a massive ship. It wasn’t until we were inside the break water and just outside of the marina entrance that we dropped sail and motored the rest of the way. Pulling up to a big dock next to mega-yachts we cleaned the boat, and I made breakfast for everyone while we waited for 7am to come around so we could get a slip and get checked in. 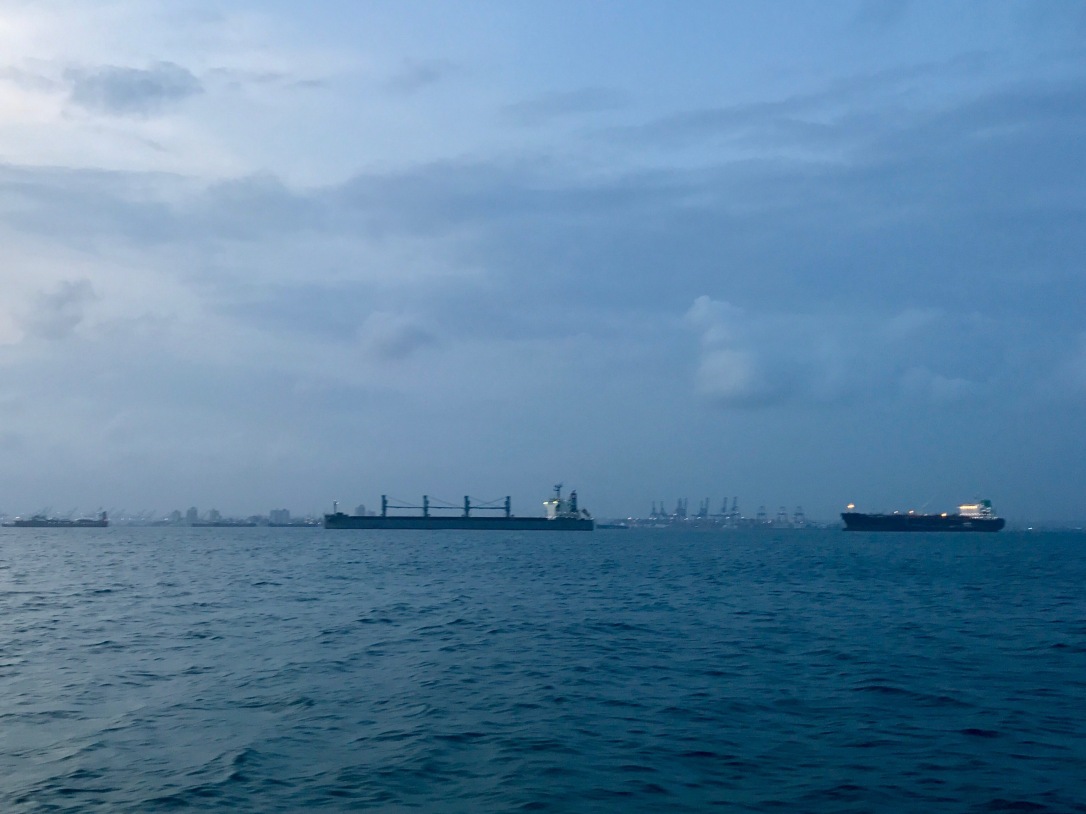 Being a Saturday no one from immigration was at the marina, so we weren’t able to get checked into the country, but had full access to Shelter Bay Marina which has showers, a pool, a restaurant, an air conditioned sailor’s lounge, a mini mart, and some hiking trails. Needless to say it is a rather nice marina and the amenities were greatly appreciated after an arduous couple days underway. The marina is rather large and within an hour of being at the dock we met people who had sailed from France, New Zealand, all over Europe, Canada, Barbados, Australia, and many more places around the world.

The following morning we took a taxi into Colon to get checked into the country. We had read in our cruising guides that Colon is not somewhere you want to be walking around, but I didn’t understand the importance of this advice until we parked at the Port Captain’s office. Thankfully for our taxi driver who stayed with us the entire 3 hours it took to get checked in, acted as a translator, and helped us when we were missing a copy of a document, I felt safe, but it was not a nice area and in fact I don’t think I have ever been somewhere with so much poverty and garbage lining the streets. It was an interesting experience to say the least and it made me feel grateful for the area in which I grew up.

Once checked into the country we spent a couple days just relaxing at the marina, enjoying showers and high speed internet. Mark had bought a plane ticket home as his part of the journey ended in Panama and on Monday afternoon we said our farewells to him. We miss you Mark! Kyle and I also packed our bags for a short excursion off the boat. We knew it was going to take anywhere from 1-3 weeks to transit the canal, so Kyle and I decided to head into Panama City for a few nights to take a break from the boat rather than wait at the marina. My dad who has travelled a lot for work had racked up some points since 1994 at the Hilton and he was so incredibly kind to surprise us and used his points to get us a room at the Hilton in downtown Panama. After 3 hours of traveling by various buses and a couple taxis we arrived in downtown Panama on Tuesday afternoon. Walking about 45 minutes through the city we arrived at the Hilton. The second the doors opened I started giggling- we did not fit in at all. My curly hair was a mess due to the humidity and rain, our clothes were wet with sweat and rain water, and our backpacking backpacks large and colorful. We were quite the contrast from the white lobby, and all the people dressed in dark suits and office attire. Regardless the hotel staff was extremely kind and due to my dad being a member we got treated really well. Heading up to the 17th floor Kyle and I couldn’t believe the room that stood before us. It was just soo fancy compared to anywhere I had ever stayed- and this feeling was intensified by the fact that we have been living on the small boat for months. Laughing about the eight dollar bag of peanuts on the table we called my parents to FaceTime with them and show them the amazing room and view they had provided us. I felt like some sort of royalty staying in that room on the 17th floor overlooking the water, the rooftop pool, and the large city. Thanks to my dad for providing such a special place to stay for a couple days 

After our stay at the Hilton we packed up our backpacks and walked to a nearby Hostel where we had a reserved a private room. This was much more our style as when we walked in the door we had to climb over a barricade of backpacks and the room was filled with young travelers from all over the world. Spending 4 nights total in the city we explored some ruins, walked the busy and incredibly loud streets, visited a museum, and walked through a large open air market. We found that Panama City has Uber and it made getting around extremely cheap and easy.

This morning we packed our bags again, and headed back to Colon and to the boat as we are beginning the transit of the Canal tomorrow. I love the bus ride from Panama to Colon because if I look close enough I can find hundreds of monkeys in the trees of the jungle that lines the road. It was a long day of traveling and shopping to pick up supplies for the boat, but I am currently back in the air conditioned sailor’s lounge at Shelter Bay Marina enjoying the quiet.

Tomorrow around 12pm we will leave the dock and motor to an anchorage about 3 miles away. (Since Mark is no longer with us, we have found some more crew- 1 person might be with us until Costa Rica, and 1 might just be transiting the canal with us. There are a lot of young people at the marina looking to be crew and travel to various parts of the world. But we’ll figure out all those details tonight.) Anyway, in order to transit the canal your boat must have 1 captain, 4 crew, and 1 pilot. The pilot is provided by the Panama Canal Authority. Once we arrive at the anchorage tomorrow our pilot will be dropped off at our boat and will accompany us through the first set of locks. We are required to provide him one “manly meal” as our agent calls it, and small bottled water. We will anchor for the night in the large lake between the lock system, and the pilot will leave the boat and return the following morning to guide us through the last set of locks. Kyle and I have gone through countless locks on both our big boat Sirocco, and in Solvi, but this scale seems to be a bit bigger. It’ll be quite the experience and I’m looking forward to what it will entail!

I don’t have very many photos from the last week as there just isn’t much to take pictures of in a big city. I’ll try to post an update about transiting the canal once we arrive at the Balboa Yacht Club on the Pacific side- otherwise it probably won’t be until we arrive in Golfito, Costa Rica in a week or two. Thanks for all the support! Onward 