Cumberland Island is a barrier island located on the Atlantic Ocean off the coast of Georgia. It is one of the original preserves in the United States and is home to over 150 wild horses among many other wild animals. With over 30 miles of hiking trails and various primitive backpacking sites, it has become one of Kyle and I’s favorite places to visit. We had been there two times before this last trip, and as always we had the most wonderful time. I work in the school system so I had a week off for Spring Break and we decided to spend that week backpacking Cumberland Island.

On Monday morning we left the marina around 6am and drove the 5 hours to St. Mary’s, Georgia to catch the 45-minute ferry over to the island. We arrived on the island around 1pm and spent our afternoon hiking 5 miles to our first camp spot at Hickory Hill. 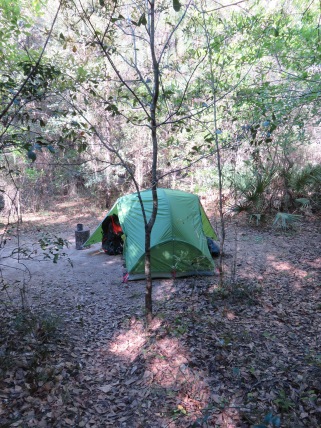 It was a nice little spot, and despite there being others around, we felt rather secluded and separated from other campers. This was Kyle’s first real backpacking trip with his new Osprey pack and lightweight gear. I noticed a huge difference in my pack weight compared to when I was on the Appalachian Trail because we were able to split the weight of the tent, sleeping bag, and first aid kit. We were both pretty exhausted and after making some veggie brats and hash browns we were asleep before the sun even went all the way down.

The following morning we woke up and made some coffee- a very important part of backpacking for me! I have gotten Kyle pretty addicted as well- oops! 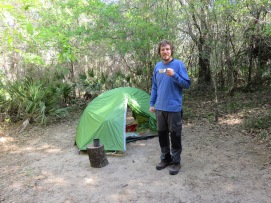 After packing up we headed towards the beach. We had over 5 miles to get to our next camp spot and decided to hike most of it on the beach. It was such an amazing day. The weather was great- windy and sunny. No one on the beach for miles, and it was low tide so it seemed that the beach went on forever. It is hard to put into words what it feels like to be alone on such a vast beach. We sang, talked, laughed, looked for shells, and took breaks running around on the mini sand bars. I don’t think we saw a single person that day on the beach- we both felt very fortunate for such an awesome day. 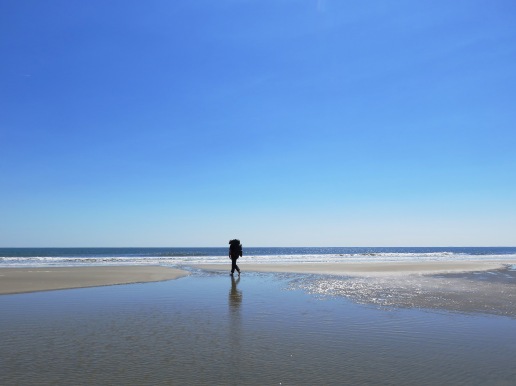 We arrived to our campsite at Brickhill Bluff by mid afternoon. This campsite is on the opposite side of the island as the beach, and is on an inland little river. It is definitely my favorite camping spot on the island, and being that it’s over 10 miles hiking to get there, there weren’t many others. That night after cooking dinner using a fire stove Kyle created (due to my lack of planning on fuel consumption), we enjoyed the sunset from inside the tent… hiding from all the damn gnats! 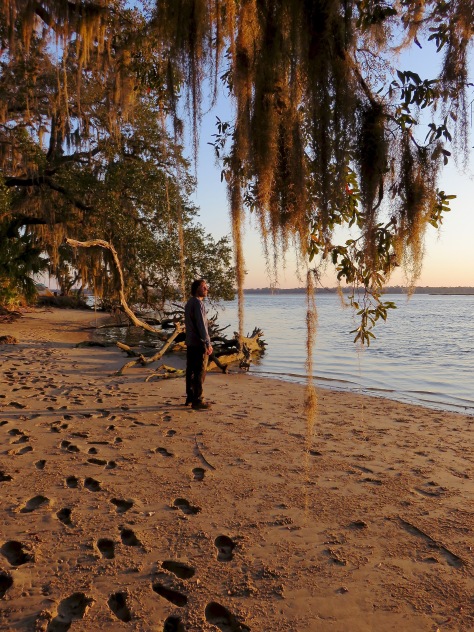 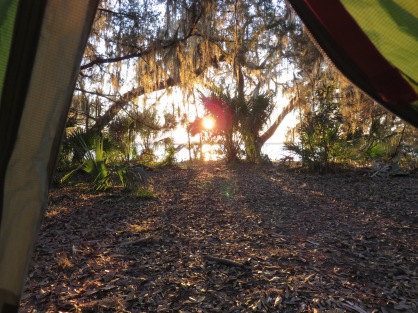 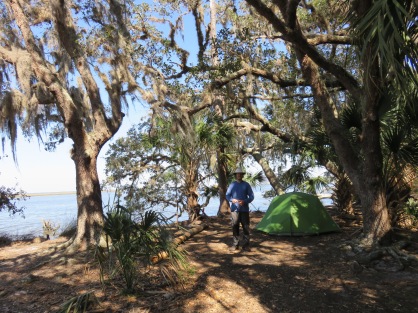 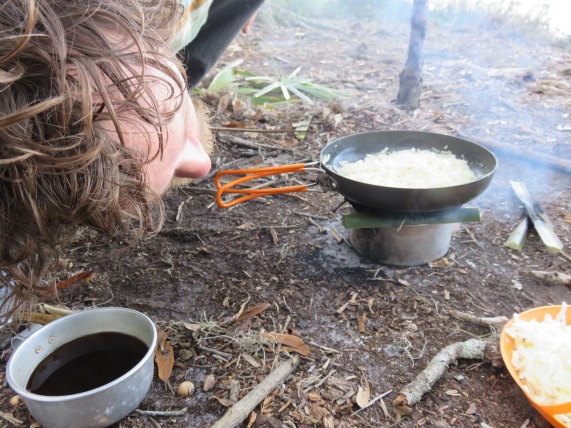 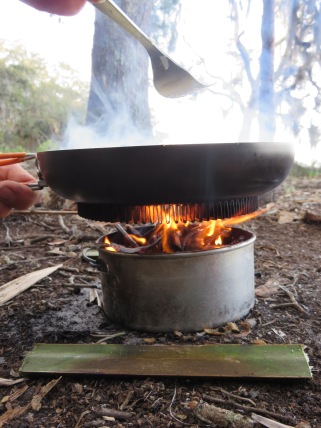 Wednesday morning we woke up to such a lovely surprise! I was drinking my coffee when I heard loud rustling in the bushes. As I was hoping there were some wild horses roaming through the camp site eating and enjoying the shade near the water. For some reason I just think the horses are so cool. It makes me so happy seeing them; they just seem so free. I imagine that their days consist of walking beautiful beaches and trails, eating fresh plants, and sleeping- not a bad way to live if you ask me.

That afternoon we decided to take a day trip down to the beach. About 2 miles each way- but with pretty much nothing in the backpack the 2 miles were relaxing and went rather quickly. On our way to the beach 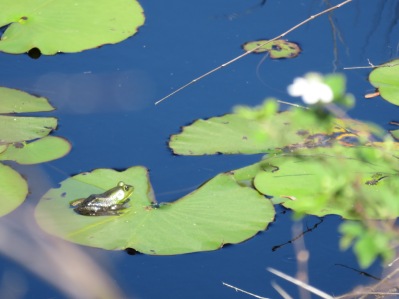 we came to this clearing in the trail that was surrounded by small ponds on each side. The ground below went from dirt and pine needles to green happy grass. For some reason this one little stretch of the trail was my absolute favorite. We stopped and enjoyed the open sky, found a frog on a lily pad, and I sprawled out on the grass for a few minutes. There was something about this section that seemed to speak to me. I was able to just stand very still observing all that was around and I felt so alive and connected to everything around me. It’s those moments that remind me why we choose to live life at a slower pace.

The rest of Wednesday and Thursday were spent lounging on the sand, playing Frisbee, swimming, and chasing each other around on the empty beach. On Friday morning we woke up fairly early and got packed up in order to head the 5 miles back to the dock where the ferry was supposed to pick us up at 2:45pm. We wanted to get going early so we could take it slow and easy and soak up our last day- which is actually the exact opposite of what happened! We took a break to check the map and eat a snack and realized that we had already covered 4 miles, only had 3 to go and it was only 9:15am. I said something to Kyle about the earlier ferry and how maybe we should have planned to get on that one. From that moment a seed of determination was planted and we decided we were going to hike the 3 miles as fast as we could in order to make the 10:15 ferry. At first I was super motivated and we started hiking real fast; then I realized that we weren’t making good enough time by walking fast so we started to jog- with our packs on! It must have been such a funny scene; two people running down a huge beach with no shoes and big packs bouncing up and down with each stride. I started to give up and say that we weren’t going to make it but Kyle kept his positivity and kept us trucking along. Finally at 10:12 we made it to the ½ mile trail that leads to the ferry. Three minutes! We kept going and I was imagining getting to the dock just as the ferry was leaving when I heard its engine running. “Kyle it left- we didn’t make it,” I said in a rather defeated manner. But Kyle ran ahead of me and a few moments later I heard “It’s still here!! Come on!!” I started to jog again and came to the clearing in the trail where I saw Kyle running down the cement dock towards the ferry. At this point the crew of the boat were clearly waiting for me to run down the dock and get on the boat so they could take off. With the whole ferry full people watching me run down the dock with my 20 pound pack on, and hearing the departure horn of the ferry, I hopped on board just in time and was accompanied by other passengers applauding that we made it. So much for taking our time and soaking up our last day! But that’s okay it was a rather entertaining last couple hours and we felt very accomplished once we sat down on the ferry knowing that we “hiked” 7 miles in less than 2 hours.

Overall I would say that it was a week full of joy and relaxation. Kyle and I both felt very fortunate for how well the island treated us. We had perfect weather, solitude, wild horses, beautiful sunsets, and a full week of nothing but the purest elements of life.