10/2/2016
Today, itself, has been an exiting day! We have officially finished what is called the Upper Mississippi and started the Lower Mississippi. Meaning the chart book which has been counting down since mile 811 for us, made it to zero! At mile zero of the Upper Mississippi we found ourselves at the confluence of the Ohio and Mississippi Rivers, where we took some photos. When looking at the photos the Mississippi River is on the left and the Ohio on the right. Hitting mile zero was quite fun and then 5 minutes later we started back over in our new chart book at miles 953. But what is cool is that when we reach zero on this chart book, we’ll be at the Gulf of Mexico! 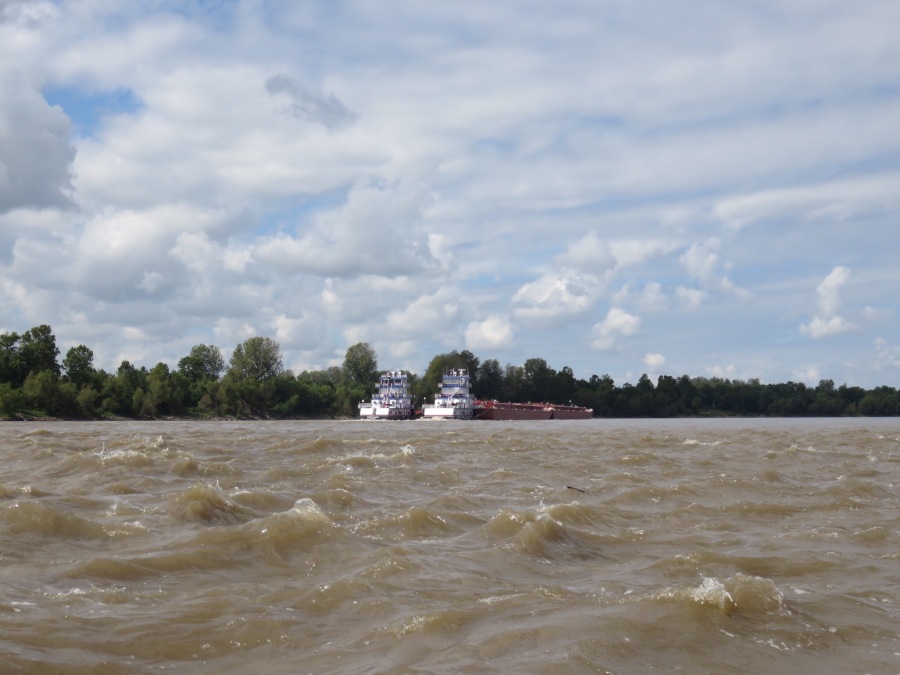 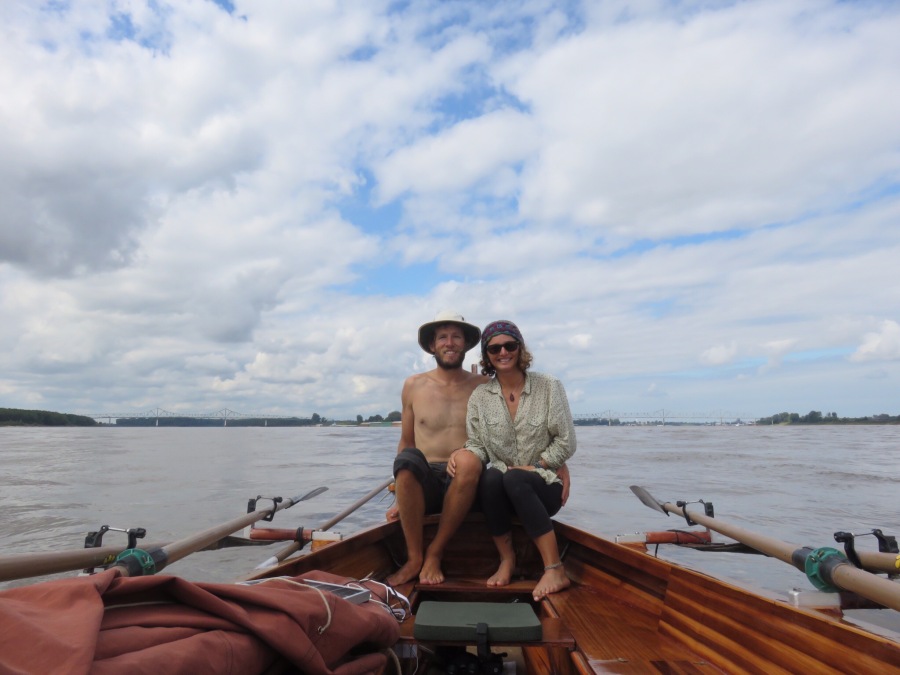 Anyway, since heading south on the official Lower River we have experienced some changes. The river has widened immensely and there are less markers all over the place. There are more barges, but since there is more river we still feel we have plenty of room. We also entered into Kentucky today! So it’s been a day full of things to celebrate. The first 20 miles of the day have been spent rowing in shifts, but now we are sailing, slow but steady.

The past couple days have brought some interesting emotions for me. I have been feeling a bit homesick. I miss our home, Sirocco, a 35-foot Cutter. I miss my friends and family; the easiness of always knowing where I will sleep and get food. The nights spent wandering downtown and days on the beach. I miss the clear salt water of the ocean and hot showers. But even with the feeling of longing for home, I don’t wish I was anywhere else. It’s a strange emotion to articulate, but it is more of an: “I didn’t realize how much I enjoyed my life until I left it for a while.” But at the same time, as I’ve mentioned before Solvi, the river, and islands have become my home. And I know that when we eventually get back to Florida, I will long for the river. Therefore, instead of getting down and wishing I was somewhere else, I will take these visiting emotions as a reminder and as a lesson. A reminder of how blessed I am to have a life in Florida that I miss. And a lesson to remember to slow down and enjoy all the little moments, because at the time it may not seem like it, but in reality those small moments, the small pleasures are what life is all about. So as the we sail down this river I will enjoy the simple pleasures of a wave of a friendly fisherman, the butterfly that lands on the foredeck, Kyle’s voice as he sings about what he doing. I will also say my thank you’s for all the friends and family I have who love and care about me and whom I love and care about. The sun hasn’t been out for a few days and I am really looking forward to it shining tomorrow. Until then I will remember that emotions are just like visitors, they come and they go 🙂  ﻿

An hour later: All I hear is the lapping of water on the hull and the sound of the harmonica. In front of me Kyle laying back. Beyond that the River Valley- the river carved it’s way through the land leaving steep shoreline. Sun glistening on the water through the bend in the carved river valley.Yes sun, it just poked through the clouds! Quintessential river- green trees and all sorts of bends. Marvelous. 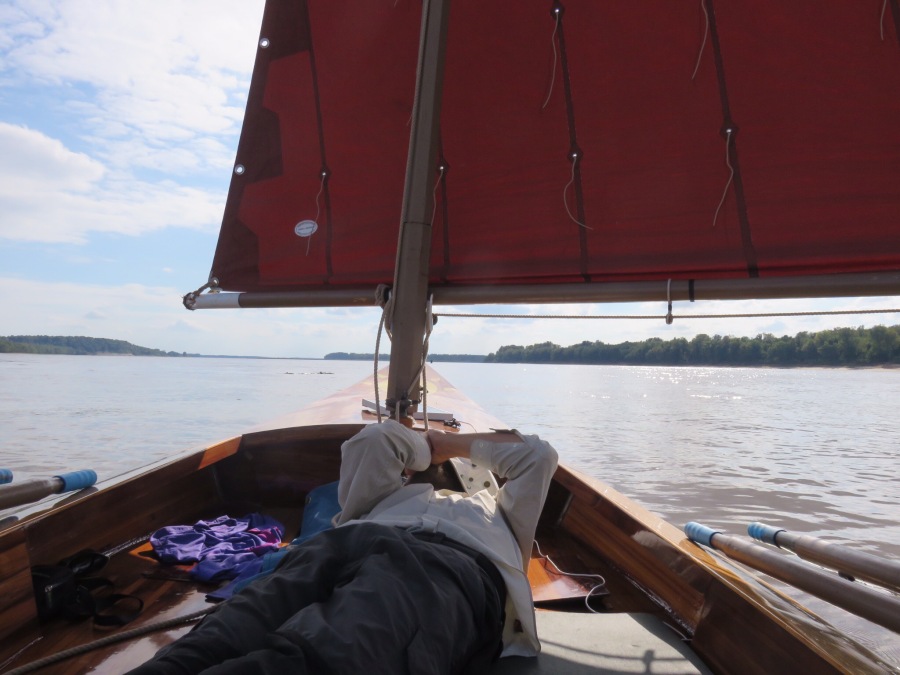 What an incredible difference sunshine can make on one’s moral! After about 10 miles of sailing yesterday we found a massive sandy beach connected to a large island. At the same time the sky began to clear and the sun came blasting out as if to say, “I’m here to stay!” Even though we had wind and daylight to continue we quickly pulled off on the sand bar. Within 15 minutes I was a quarter of the way done with the laundry that had accumulated over the cloudy rainy days. Kyle set up a nice clothes line and had our tent, sleeping bag, and pads airing out in the sunshiny breeze. We both found ourselves with a burst of energy and a major moral boost. The sun was out, the sky was clear, and we had a huge sandy beach, a beautiful section of the river, and to top it off we were officially halfway between Wisconsin and New Orleans…time to celebrate! And celebrate we did. After finishing laundry and allowing everything to dry out Kyle cooked baked potatoes, rice, and veggies over the fire. We followed that up with iced red wine and dark chocolate as the sun set and a sliver of moon appeared. Next to the sliver of moon was one lone star and in the background was pastel pink and orange a washed behind the tree line. We cheers’d to the Lower Mississippi and spent some time discussing our favorite parts of the trip this far. As we talked the sky grew darker and the stars multiplied. It was such a clear night that we decided to cowboy camp next to the fire pit. Kyle retrieved our pads and sleeping bag from the tent and we set them up near the dwindling fire. There, under the abyss of the universe above, we spent our evening. I found myself like a young child trying to keep my eyes open and fighting the urge to sleep just so I wouldn’t miss out on anything. We saw a half dozen shooting stars flying through the sky at a speed my mind can’t phantom. We searched for constellations and had long in depth conversations about other earth like worlds. The air was crisp, providing a chill in the air but also improving the clarity of the world around. Besides some tugs passing by, all we could hear was the noise of distant crickets, but behind the crickets was silence. We found ourselves whispering as though if we talked too loud our voices would damage the silence. Eventually my eye lids fell too heavy and I drifted off. Sometime in the middle of the night we both awoke to find ourselves engulfed by a sea of fog. The log that had been 5 feet away was not to be seen. The river..well what river?? It was just our 7 X 5 foot square of blankets and the tunnel of sky overhead, nothing else seemed to exist. We tucked ourselves into our sleeping bag to stay warm and stayed awake long enough to catch a few more shooting stars. The sun shining bright in the sky is what woke us. The fog slowly beginning to lift I looked over at Kyle and he instantly burst with laughter. “What?!” I responded with intense curiosity. “Good morning sandy!” he smiled. I looked around and noticed that my entire area of the sleeping bag was caked in sand. The fog made everything wet and somehow I then layered the dew with sand. It was everywhere: on my face, my hair, my sleeping bag liner, and inside the sleeping bag. Kyle’s half was sand free..oops 🙂 We laughed and went about our morning as usual but really soaking up the sunshine which was quickly drying the after effect of the foggy mist.

After the confluence of the Ohio and Mississippi Rivers we found the water to be clearer and sandy on the bottom. We took advantage of this and the sunshine and showered in the river before taking off. It was a revitalizing swim which we followed up with by running in circles with our arms outstretched on our big sandy beach in order to dry off in the breeze. Showering has become such a fun and refreshing experience, we always end up running around due to the revitalization and feeling of being clean.

We got underway around 11am and spent five hours on the water before we reached our 30 miles. We took shifts the entire time which again, boosts moral so incredibly much. Rowing for an hour at a time as compared to say 4 hours straight is well worth going a bit slower. Since the sun had finally come out we were able to charge iPods and thus listened to music most of the day. Some days we choose the quiet of the river, others music is a motivator. We sang to Old Crow Medicine Show, Trampled by Turtles, and The Devil Makes Three- some of our favorites. Around 4pm we hit 30 miles and found a sandy island to pull off on. There is SO much sand everywhere on this part of the river which has made camping awesome. I particularly enjoyed the landscape of the island we chose. The river had risen so high at one point that it took a bunch of the shore with it, leaving shelves of sand, mud, and a mixture of the two. Some of the mud was so hard and dried out that it had cracked, leaving a spiderweb effect on the surface. Not only was it cool looking, it created an interesting texture on my bare feet. And then in various spots on the mud and sand patches of grass were growing from the cracks as though trying to save the eroded shore with roots from the brutal grasp of the mighty river. We took a nice stroll on the eroded river’s edge, climbing over and under fallen trees and driftwood that had created a natural jungle gym. We cooked quesadillas with beans and tomatoes over the fire before crawling into our tent early, both exhausted from a marvelous day of rowing in the sunshine.