Yesterday afternoon around 1:30 Kyle and I rowed away from Morgan City with a 25mph North wind behind us. After clearing the railroad bridge and the traffic area we put 3 reefs in the sail and surged along at a 7 knot average. The seas were about 2ft and Solvi was surfing along happily. The sun was out but the air was cold so we were bundled up. We completed 20 miles in 3 hours and as the sun began its decent we waved farewell to the Atchafalaya River. Finding a spot in Fourleauge Bay to hide Solvi from the wind we dropped anchor in the mud and tucked in close to the low lying marshes. We quickly set up the boom tent as we knew the temperatures were going to drop to the 30’s. As we made our home cozy and warm, Kyle and I observed the scenery around us. The sun had set over the low land and the sky was glowing a deep orange. The marshes and land around us, different than anything we have experienced thus far. Birds and frogs singing their nightly song while I cooked corn and pasta on the stove, warming our boom tented cabin. The Gulf of Mexico just on the other side of the barrier islands near us, we relaxed and said our thank you’s for making it this far.

Today, temperatures still rather cold, is sunny and windy. Kyle is making eggs and hash browns and just handed me a steaming cup of coffee. Socks, leggings, sweatpants, long sleeve, fleece jacket, a hat, and some gloves and I am feeling cozy and ready for our 20 miles day in the protection of the bay.

We did it!!! At this moment I am in our tent on a beach on the Gulf of Mexico 🙂 Today ended up being a rather long day of rowing, and at noon I went from being all bundled up to wearing my swim suit. The day, while arduous physically because of all the rowing, was quite spectacular. The bay we were on was serenely calm and the water reflected the blue sky above. Being that we are in the marshes the land is real low, only about 3ft above the water. Within these marshes is a massive system of sloughs and bayous- we have heard it is rather easy to get lost within them so we don’t venture too far from the main channels. Due to the land being so low it often disappears on the horizon, in fact a couple times we would be rowing and although land was less than a mile away, it could no longer be seen. The only evidence was the green colored clouds that seem to form above land. Every once in a while we would see a small fishing boat or a large shrimp boat pass by, but other than those encounters we were surrounded by nothing but calm water and marsh.

Around 4pm we rounded a bend in Oyster Bayou (a small inlet leading from the bay to the Gulf) and saw the most amazing sight. Not only the open Gulf but white beaches! Kyle and I have not slept on land for over a week and have been living in a 4ft by 10ft space, so the idea of walking around, sleeping in our tent, and having some space made us so giddy. Rowing along I suddenly saw something that made me cry- a dolphin! No 10 dolphins! Swimming all around us as to welcome us to the salty waters. The 10 minutes it took to row to the beach was full of laughter and silliness. We landed on the beach which is actually tiny shells and not sand, but a beautiful beach all the same, and pulled Solvi up on both rollers. Hand in hand we walked down the beach and turned left and were greeted by endless water, calm and magnificent. After exploring a bit and taking some photos we quickly set up camp and made dinner. All the while dolphin swam right near our beach, fishing, and slapping their tails. I was blowing up our sleeping pads in the tent when I heard a loud splash! “Danielle come here quick!” Kyle called. I clobbered out of the tent, tearing out some stakes, and stumbled as I put my boots on. Before my eyes was the setting sun, glowing so deeply that it was as though the orange was bleeding out of it and filling the horizon. And then not one dolphin, but two dolphins flew out of the water, in sync, and dove into the air at least 3ft before gracefully diving back in. Again and again dolphin jumping, sliding, slapping their tails and quite literally putting on a show before the setting sun. Tears filled my eyes- I felt like I was floating in pure joy. The last three months of extremely hard work and dedication led to this moment and I just couldn’t contain myself. I was running around and jumping all about. Might I add that I have a slight obsession with dolphins, and felt as though they were putting on a show and welcoming us to their waters. It began to get cold as the sun disappeared and my dinner was ready. I stood by the boat and munched on quesadillas and tomatoes while the dolphin continued to play. Pelicans and great blue herons flew by, coasting near the water’s surface as the second sun set turned the Gulf waters blue and green. Eventually it became too cold to stay outside so we retreated to the tent, but as I write this in my lined notebook, I hear countless dolphin as they come up and spray water as they breathe. The Gulf water is lapping on the shorelines just 10ft away. Thank you Dolphins! Thank you Solvi and Kyle! Thank you Universe. Life is wonderful.

It is 9am and I am sitting cross legged on Solvi’s port side. The tan bark sail is full with no reefs. The water is smooth and calm with only small wavelets that cause a soothing sound as Solvi’s bow pushes through them. Kyle is sitting on the floor of the boat so he can comfortably steer and see under the boom. To our right is open water that leads to South America and to our left is the sandy beaches of Louisiana. The sun is shining and we are sailing on a beam reach (wind is coming from the beach as we sail parallel to the shore) at a comfortable 4.5 knot average. The movement of the boat is smooth and comfortable as we sail southeast towards our intended camping spot 20 miles away. Being a mile off shore makes the land seem far away and is a bit of a freeing feeling. I honestly don’t think we could have better conditions for our first off shore hop. Every once in a while I see a dolphin’s fin protrude from the water’s surface and I smile as I think about how I was kept up last night by dolphins fishing 15ft from my head. Beautiful it was. I was so thrilled that I kept waking Kyle up by accident to climb over him and peer out of his shore side facing vestibule. I feel as though I could fill pages discussing my fascination with dolphins, but I’ll just say I feel at home out here surrounded by them.

As I write this I am bundled up with gloves and socks and my warm hat. Salt water splashes on the bow every once in a while when Solvi heels in a gust. Many people, including ourselves, knew that spending time in the Gulf of Mexico in a small open boat is not something to be taken lightly. Therefore we did a plethora of research and also patiently waited for a weather window. Even with our preparedness I was feeling a bit nervous and apprehensive just because the Gulf is much different than an inland river. But through discussions with Kyle and also knowing that we could row inland through the marshes if necessary, I pushed through my fear and took the leap. And my goodness am I thankful I did! This, right now out here sailing in the Gulf, is absolutely spectacular! Both of us grinning from ear to ear in joy and gratitude. Happy Sailing! 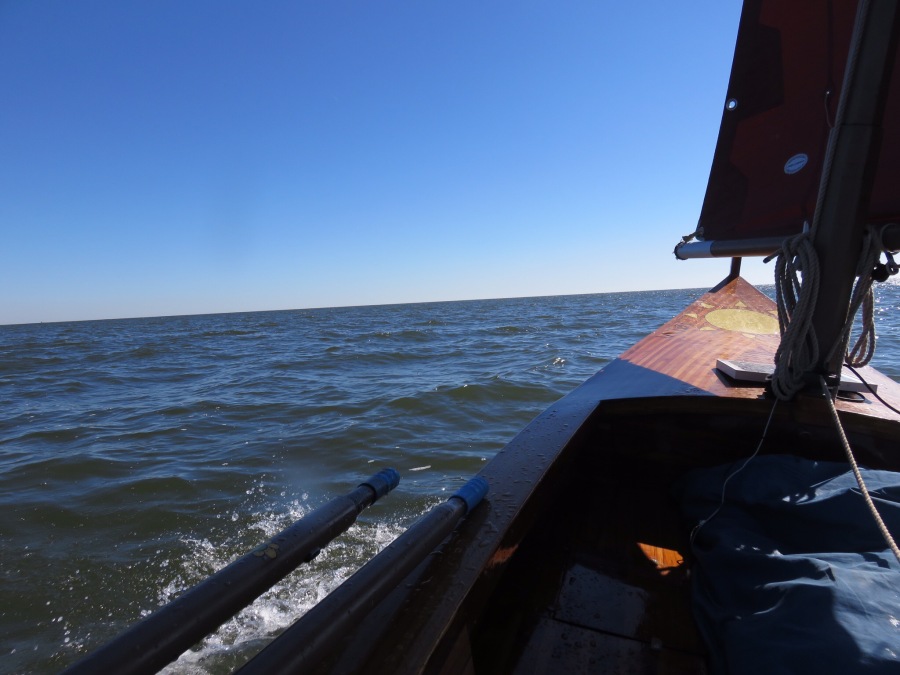 3 thoughts on “Salty Waters and a Spectacular Welcome! ”