4/19/2017
The sun is setting off our starboard stern quarter, the sky exploding into an array of pastel colors. The small island of Isle Santanille (aka Swan island) is in front of us and the white beaches are reflecting the setting sun. Max is cooking lentil stew for dinner which is causing the boat to fill with a warm aroma of garlic and various vegetables. We are all feeling satisfyingly exhausted after a long day full of activity. Getting to this small island that seems to be in the middle of nowhere was quite the journey and I am feeling grateful for the 2.5 nights of rest we are enjoying at the anchorage in the lee of the island. 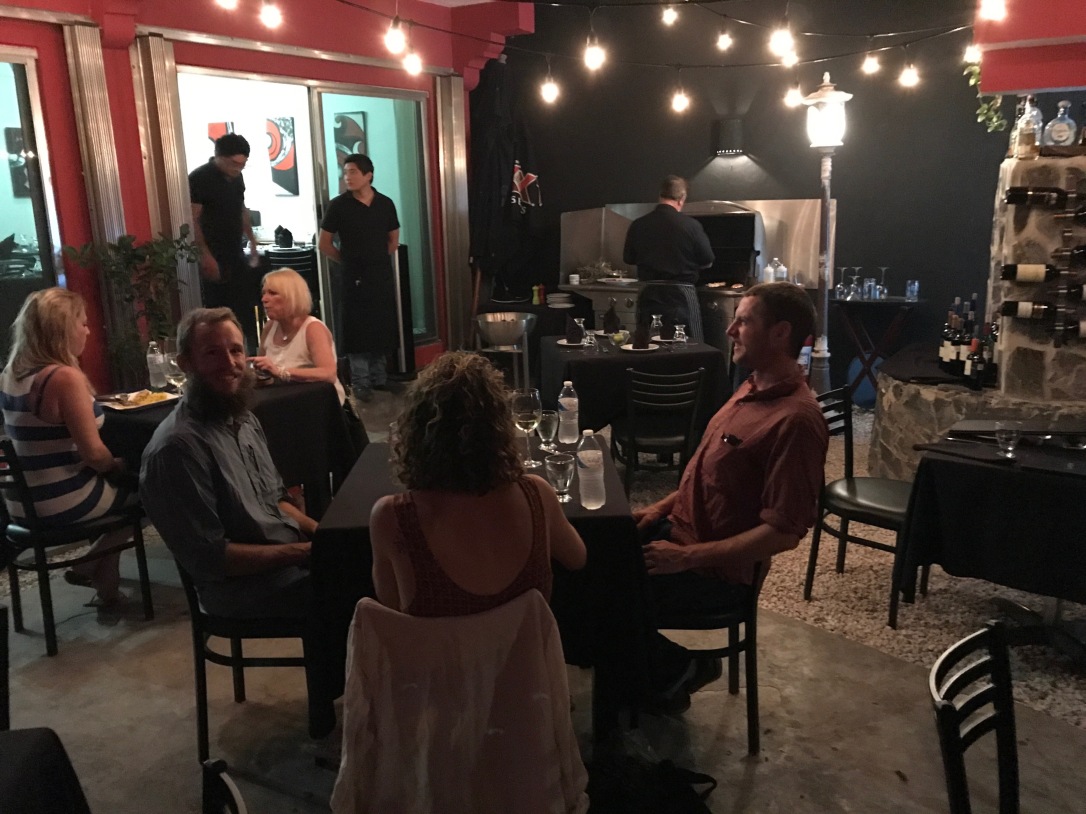 After a couple days of exploring Isla Mujeres and a fantastic dinner at a small, romantic restaurant called Limon (Thank you again Todd!! It was absolutely fantastic), we decided to go explore the mainland. Originally we had planned to visit Tulum to see the Mayan ruins. This was going to be about 3 hours of travel via ferry, cab, and bus. A lot of travel, but we felt it was worth it since we’d get to spend the entire day there. Well on the ferry ride to Cancun to catch the bus, the group decided that they would rather visit Chichen Itza to see the largest Mayan pyramid. I was hesitant at changing plans at the last moment, but a 3 to 1 vote and we bought tickets to Chichen Itza. It wasn’t until we were on the bus that we found out that even though it was only supposed to be a 2 hour bus ride, because we got the second class bus, it would be a 4.5 hour bus ride. Long story short, the day did not go as planned haha- we spent, quite literally, 12 hour traveling between the bus, ferry, and cab rides. Fortunately it all ended up being worth it as the ruins were a once in a life time experience and absolutely amazing. The scale just blew my mind. The bus ride, while incredibly long, was actually quite interesting as it took us right through the middle of inland Mexico where I was able to sit at the window and observe how people live in that area. It seemed to be rather impoverish, many run-down huts, completely open aired buildings, and a lot of people in small spaces. But at the same time, the people seemed to be happy and enjoying life. Kids ran around freely, and many people lounged in hammocks. We arrived back at High Climber around midnight and sleep came fast. 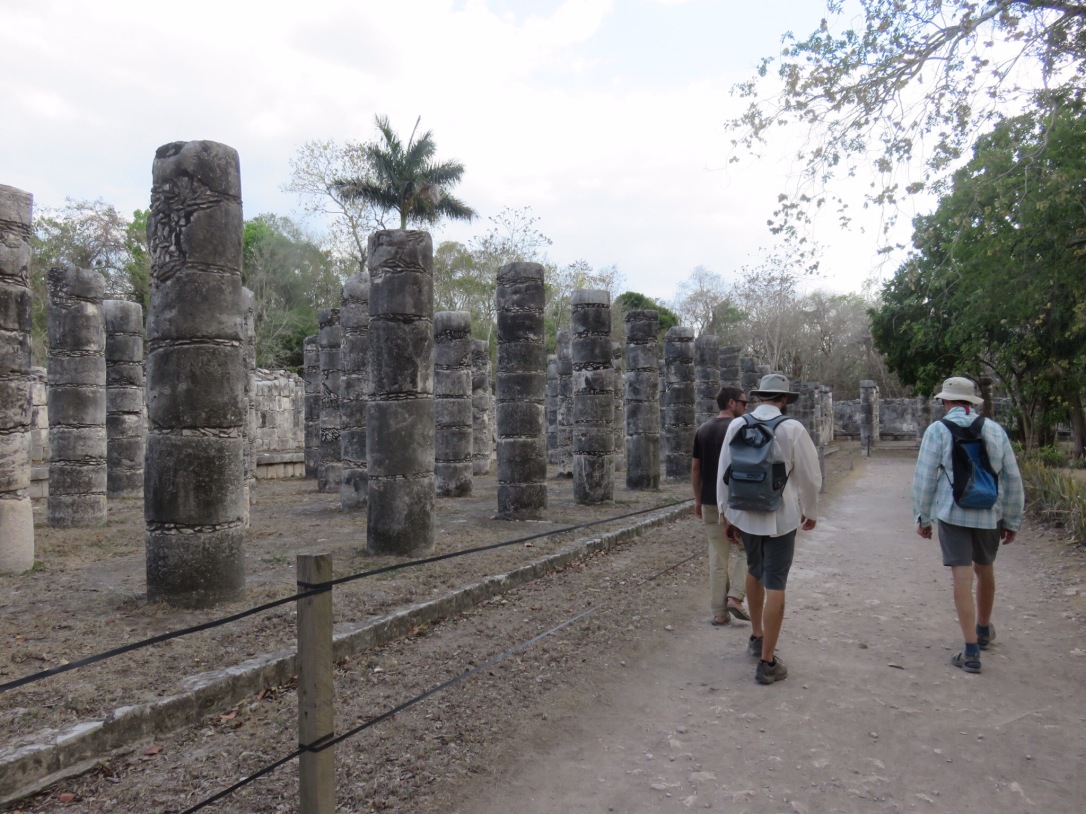 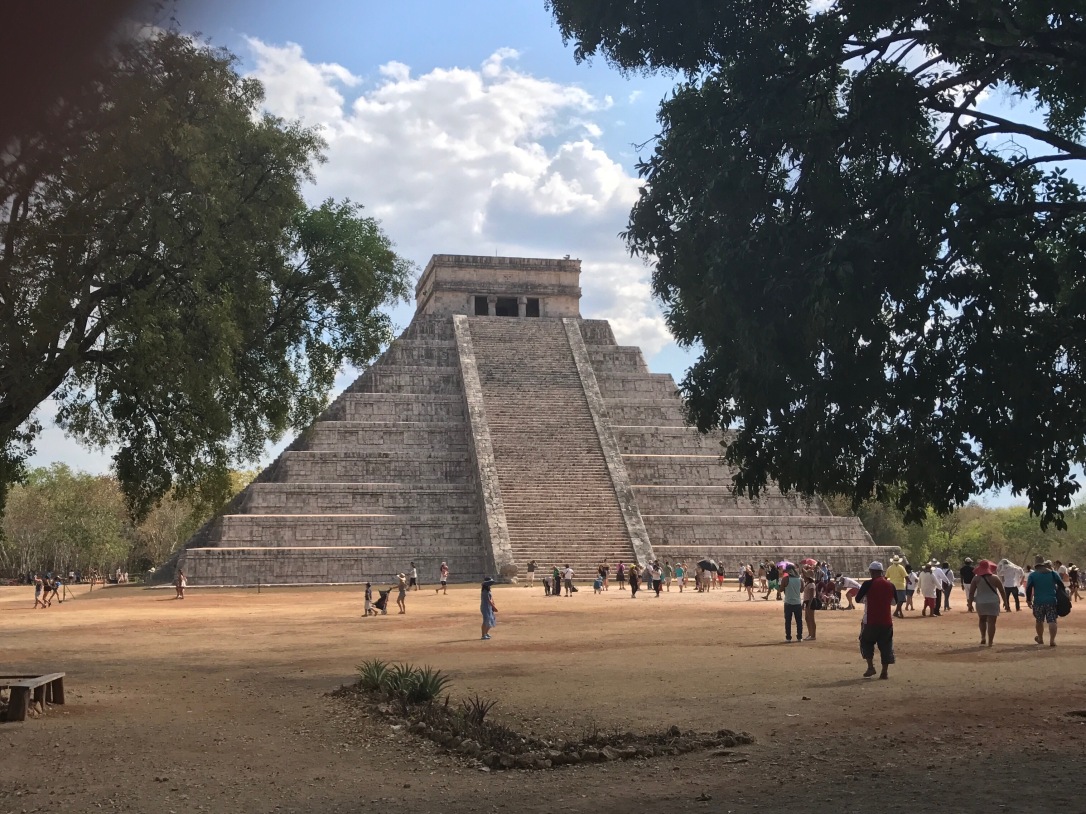 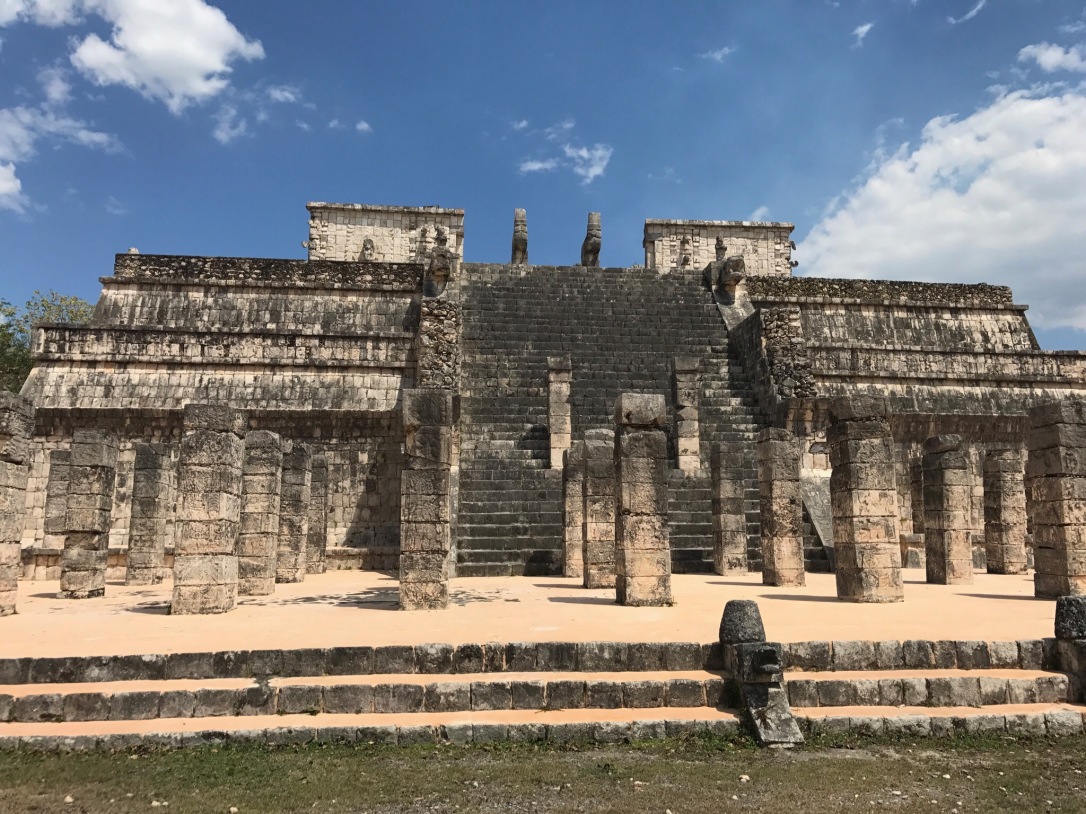 Once back at the dinghy they allowed us to take some pictures together, happily giving thumbs up and taking some of us as well. Before we were about to hop in the dinghy they asked if we had any more cookies or chocolate. Max and Mark rowed back to the boat to get some Easter candy we had left over from my parents and home-made fudge our neighbor at Blind Pass made us. While Max went to get to get more goodies I spent time trying to communicate with some of the guys. They were curious about Florida, where we were heading, if we had kids, and if we would get a hotel in Providencia Columbia. Max arrived with their chocolate and they helped us launch the boat again. Smiling, waving, and laughing we said our goodbyes before heading back to High Climber. I felt so incredibly thankful that they approached us for the olive oil so that we could get to know them and explore the island. Funny to think how scared I was when I saw them lining the shore with guns, and then ended up playing a friendly game of soccer with the same men.

The island, while small, was beautiful and untouched other than the small living area the Navy had developed. The reefs were clean, healthy, and alive. The beaches white, with no garbage or evidence of humans. It was refreshing and I am thankful that this island has stayed mostly unvisited and that there are still places like this out there. Thanks to the Honduras Navy for protecting this gem in what felt like the middle of the Caribbean sea!
The following morning around 10am we secured everything in the boat, lifted the anchor and headed towards our next stop- Providencia, Columbia- 280 miles Southeast of Swan Island. 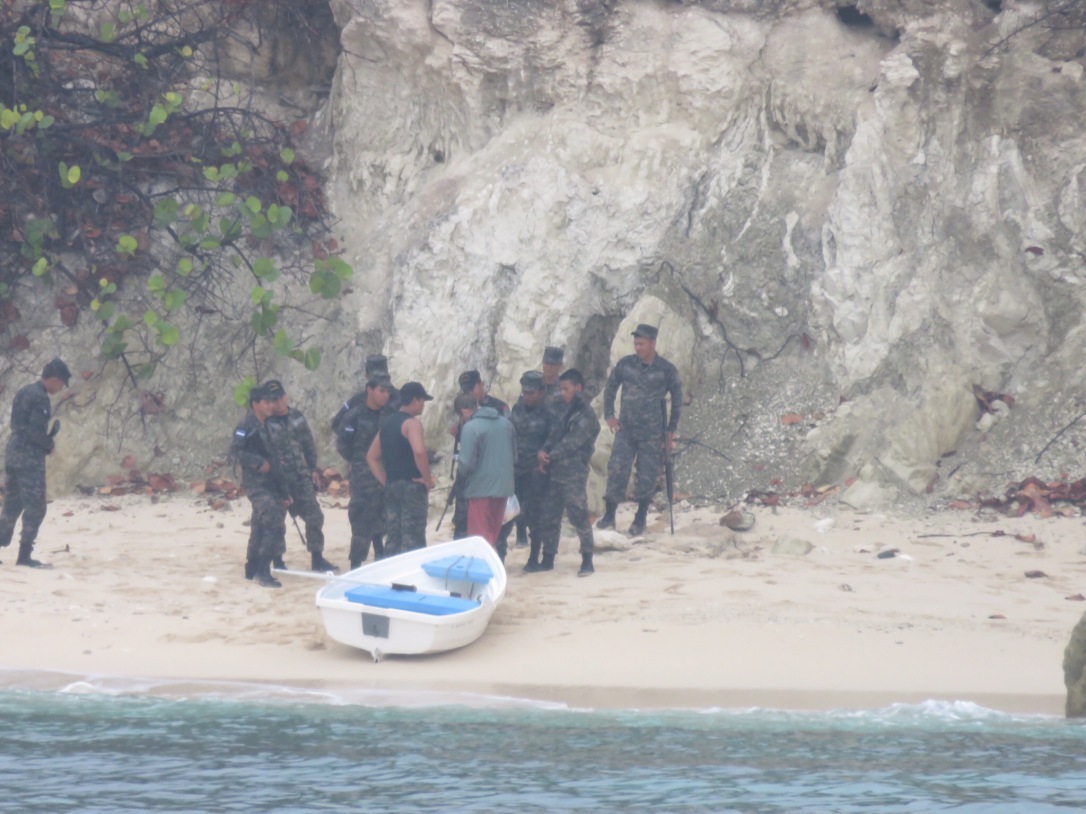 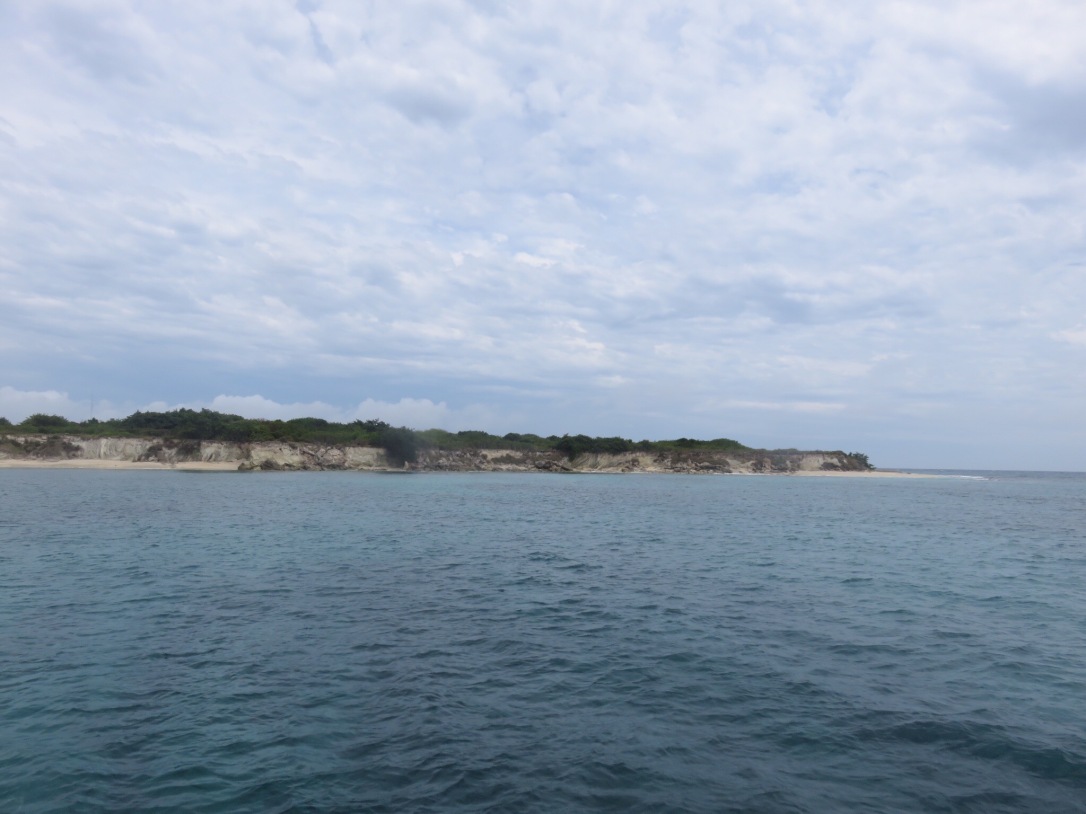 **We are currently in Providencia, Columbia after a safe and comfortable passage from Swan Island. It will take a while due to lack of internet for a week-ish but stay tuned for photos of this beautiful mountainous island!**