Last week after we spent the day exploring Frazer’s Hog Cay we decided to make our way North to some other Berry Islands. We were both feeling quite ready to leave our anchorage as we had been there for quite some time and were starting to get a bit stir crazy. It was a Monday and we did our usual weather and routing checking and planning and decided to leave the following morning. But first, we had one more island to explore! Kyle had been eyeing this outlying island since we arrived and kept checking it out through the binoculars. It was unique in that it looked completed surrounded by white sandy beaches- no breaks in the shore of rocks or mangroves. We loaded up the dinghy and headed towards the island. It turned out to be a further dinghy ride than we had thought, but still only took about 30 minutes. As we approached the island it was clear that Kyle’s thoughts were correct, white sandy beach surrounding the entire island with a large wooded area in the middle. We jumped out of Lucy and lifted her up onto the beach. I went to setting up our blanket and books and other gear we brought for our afternoon on the sand bar. It was a nice change to have such a large area of sand. The other islands we had been exploring were either very small, or only had a few patches of sand and otherwise were porous sharp rock. Choosing a direction we headed down the beach with the goal of circling the island. An hour or so later we had circled the island 3 times and had quite a bit of fun along the way. There was a tiny little sandbar a couple hundred feet from the beach on the opposite side of where we landed and we waded out to it. Running isn’t something we get to do very often, so we took advantage of the long sandbar and ran back and forth- chasing each other, racing, and giggling. There were star fish scattered all around the edge of the sandbar and I stopped to observe them from time to time. We stretched and took deep breathes. We talked about how grateful we were and how hard we worked to get there. We discussed the ups and downs that led us to that moment and looked around in awe at our surroundings. We felt like we were the only ones in the world at that moment and that we were free. It was clear that the tide was starting to come in as our sand bar began shrinking, so we waded back to the beach and continued our walk- checking out all the rubbish that is scattered on the edge of where the sand ends the woods begin. That’s something we do a lot on these deserted islands- look at all the garbage and plastic that has made its way to these desolate places. Anything you can think of we find the remnants of. Balloons, glass, plastic jugs, oil jugs, fuel jugs, milk crates, pieces of doors, houses, boats, TV’s, ropes, plastic pieces of any size and color imaginable- plastic and more plastic. We go through this stuff and look for things useful to us. The other day Kyle found a large net made from polyethylene that was wrapped around some mangroves. He took the net and cleaned it and fixed it up and it is now our bow sprit net! So we can lounge next to the bow sprit on calm days at sea. At first all this rubbish made me sad, but now after seeing it on every beach in every country I have visited, it has just become what it is. It’s just how it is. We clean up what we can, take what we think is most dangerous to sea life and birds, and dream about one day coming back in a huge boat and cleaning up all the beaches. But for now, as to not let it ruin our adventures, we include it in our exploring and see if we can find any treasures within the plastic. 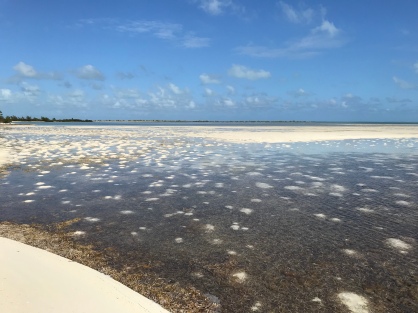 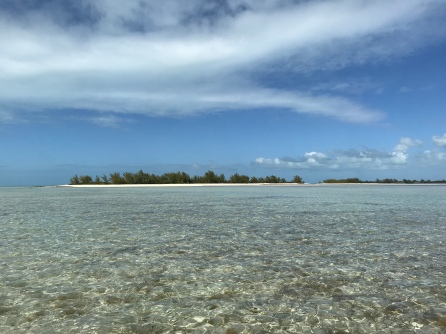 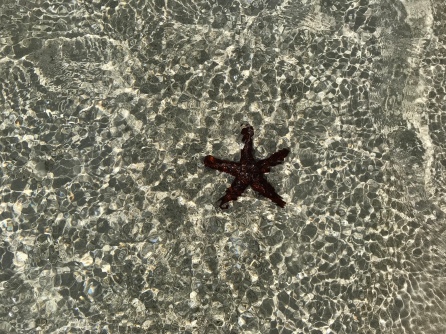 The rest of the day was spent lounging on the tie dye blanket, reading our books, napping, and chatting. Around 3pm we headed back to Sirocco to get the boat ready for leaving the next day. But unfortunately as the night went on and we checked the weather, it was looking like the wind was picking up tomorrow and that Wednesday would be a better day to leave. Neither of us wanted to do this- we were both ready to move on and had just spent the evening getting Sirocco all secured and ready to sail. We held out hope that we could leave in the morning and went to bed early. I awoke around 4am to see Kyle checking the weather and a couple seconds later heard the wind howling outside. “Tomorrow is way better. Today will be rough,” he said rather glumly. For some reason both of us were rather disheartened by this news, but knew for our comfort waiting one more day was the thing to do. I know it probably seems like waiting one more day isn’t a big deal- which it really isn’t. It’s hard to explain, but living on this little boat surrounded by nothing but water and uninhabited islands is incredible, but it’s also very isolated. And after one week we had explored every island in sight and were really ready for a change of scenery. Kyle quickly settled down to do some work on his computer, but I felt anxious and antsy. Should I go through the hassle of untying the dinghy, launching it, getting out the oars, etc, just to have to do it again later that evening? No, didn’t feel like that. There were plenty of things I could be doing- boat projects, writing projects, cleaning, cooking. Didn’t feel like any of it. So instead by 1pm I found myself running up and down the side decks. I just felt like I needed to MOVE. So despite only having about 20ft of space on each side, I ran, jumped, jogged, and skipped up one side of the boat, across the foredeck, and down the other side. I did this for 20 minutes until I was out of breath and exhausted. Then I moved onto jumping jacks and other random exercises on my yoga mat. Finally I was hot and jumped in the water. Kyle got up and came swimming with me and we snorkeled around for a good half hour or so. By the end of all this is was 3pm and I was thoroughly tired. I felt much better and after showering and cleaning up I settled down to a movie in the v-berth on my iPad. Later that night I did yoga on the foredeck and reflected on what it was that was causing me to feel so unsettled earlier in the day.

By 6am the following morning we were pulling up the anchor and talking about how thankful we were that we waited a day because the conditions had lightened considerably and the wind was in the perfect direction for sailing the 22 miles North. The sail took about 4.5 hours and we were able to sail the entire way, only turning on the engine in the last 10 minutes to position ourselves and secure down on the anchor. The day was beautiful and it was a unique sail for us as we were able to skirt pretty close to shore, which we usually don’t do. So while sailing we could see the beaches of the outer Berry Islands and the rocky cliffs covered in grass and a random house or two. The seas were rather rolly and even though they were fairly calm, the rolling waves made me a bit seasick. It was mild, but I napped in the cockpit and towards the end of the passage found myself rather excited to be coming into the inlet. We arrived to Little Harbor Cay around noon and dropped the anchor behind some rocks, protecting us a bit from the rolly seas. We knew we wanted to move to a different anchorage, but in order to do so had to go over some shallow areas so wanted to wait until high tide and to sound the area in the dinghy to create a path for Sirocco. We launched the dinghy and took our lead line and rowed through the shallow pass, dropping pins on the deep spots on the navigation chart on the iPad. Having found a way through, we waited until high tide around 5pm and motored Sirocco to a more protected anchorage. We only hit the sand twice while motoring through the shallow pass, and both times were able to quickly motor off and move over a couple feet to find “deeper” water. The next anchorage was pristine and the water was so calm. The moon, being almost full, illuminated the sky long before it was dark and continued to do so for the rest of the night.

The next morning we filled our coffee mugs with hot coffee and hopped in the dinghy to go explore the area. We both found ourselves pleasantly surprised by this area. The islands were tall, at least 40 feet and had some rocky cliffs overhanging us. It was a nice change from the flat sandy islands. We motored the dinghy through some narrow channels and found a sandy beach to land on. Kyle suddenly became determined to have a coconut for breakfast and went on a mad hunt for coconuts. We motored all around these little islands and in and out of little inlets looking for coconuts. I’d drop him off on a shore and he would try to bush whack himself towards the palm trees in the middle of the island. Finally he decided he would have to abandon the mission of fresh coconuts as we were both getting very hungry for breakfast. I will say though, that for the next 4 days he talked constantly of fresh coconuts to the point where all I wanted was a fresh coconut too! 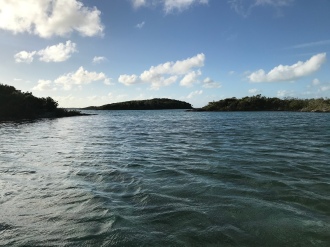 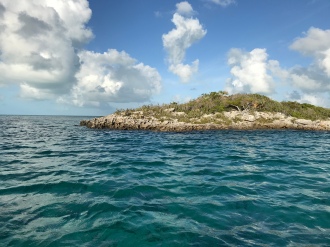 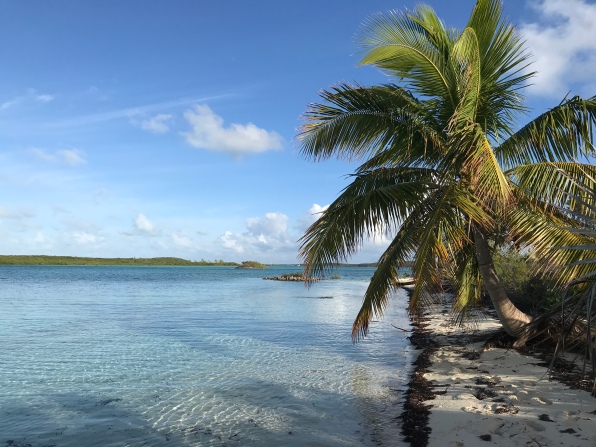 The following day was similar to this, checking out the islands, and finding beaches to enjoy a beautiful sunset. So while we were doing similar things as we had been doing before we moved the 22 miles North, it was new and refreshing and the islands had a completely different feel. We found one particular spot that I absolutely loved and we went back multiple times to enjoy it. Here is a little journal entry I wrote about that particular spot: 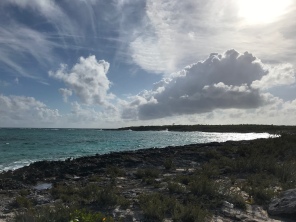 As I write this post we are no longer in the Berry Islands and have moved to an island outside of Nassau called Rose Island. But I will get to all of that later- for now it’s time to start my day and possibly go scuba dive a ship wreck nearby. Write soon! -D

P.S. It has come to my attention that there might be some issues with enlarging photos on the blog. Unfortunately I don’t know how to fix this, but have found that if rather than going to the blog from the e-mail that is sent and instead typing in: www.skipperandflipper.com in your internet browser, you should be able to enlarge the pictures there. I am posting all of these posts and pictures on a small iPhone screen so please bear with me through typos, autocorrect mistakes, and odd formatting issues. Doing the best I can for being in some pretty isolated areas with limited connectivity 🙂 Thanks.

5 thoughts on “The Berry Islands Continued”