About a week or so before Christmas, Kyle and I left the Berry Islands and sailed the 40 miles towards Nassau. We had plans to meet my parents in Nassau on the 22nd for Christmas, but since we were a week early, we decided to avoid the city for just a few more days and anchor at an island called Rose Island, just 5 miles East of Nassau. The morning we left the Berry Islands, the alarm sounded at 4am and by 4:45 we had hot coffee, sails ready to go, and everything secured down below and on deck. The moon was providing just enough light that we didn’t need the spot light and we quietly lifted our anchor and navigated around our neighbors out the inlet. A couple minutes later we were in deep water and Kyle raised the sails while I set our course towards Rose Island. Even in the lull of the early morning we were able to shut down the engine and with the spinnaker set were able to travel at 6 knots.

We set the wind vane so we didn’t have to steer and then sat on deck sipping our hot coffee as the sun began to rise. First the sky changed from a dark deep blue, to a more gentle blue with the slightest tint of light. As the moments passed our surroundings became more vivid and I could make out the surface of the water. It was obvious where the sun was going to pop up over the horizon because there was a subtle glow where the water and the horizon meet. We watched as the glowing ball of fire began rising above the horizon line. That moment when the sun seems to be suspended half way up and half way down- it could be rising or setting. I closed my eyes and took a deep breathe. Whenever I close my eyes and focus, the movement and sounds of the boat are much more vivid. The surging of the boat through the water, that feeling when Sirocco catches a gust of wind and I know that our speed increased and I can hear the hull push through the water’s surface. Those are the moments I feel most connected with the boat and the water holding us.

As the morning continued I went down below and took a nap while Kyle stayed on watch. I got some pretty good sleep because the motion of the boat was calm and consistent. By the time I woke up it was close 10am and I got out some snacks and made some more coffee. We took the spinnaker down because we were making over 7 knots and the boat was over powered. Under the genoa, stay sail, and main sail we continued on at a consistent 5.5-6.5 knots. Kyle took a nap soon after and I had the most spectacular watch. I grabbed the speaker, my coffee, some crackers, the binoculars, the iPad (for the navigation chart) and headed to the foredeck. The sun was shining and began to warm up my body so I could take off layers. I found a comfortable seat on the forward edge of the cabin top and put the speaker on loud. It blasted all my favorite songs while I sipped on hot coffee and we sailed along. The waves were growing in size as we made our way towards Rose Island, but not in a threatening way. I found myself transfixed, just watching as each rolling wave moved under Sirocco. Or maybe we moved over each wave? Either way, the waves rolled by and I sat and observed. With my favorite songs playing, dark hot coffee flowing, the sunshine warming me, and Sirocco sailing herself along so nicely, I found myself with a grin affixed to my face. I felt so happy. So free. I really wanted Kyle to wake up to share it with me, but also enjoyed the solitude. Soon he did wake up and he came and joined me on deck. We sang, laughed, and checked our progress from time to time.

Soon we could begin to see land again, it was around noon that we could see the inlet leading into the protection of Nassau and Rose Island. As we began to approach the inlet, we disengaged the wind vane, dropped the main sail and the stay sail and ran under the big genoa in the front. We were making good speed as it was, and the inlet was a bit tight. I was on the helm and since the tide was coming out of the inlet and the wind was pushing through the inlet, the wind and the tide were against each other, thus creating very large waves. Easily 6 feet. This was a big difference from just 20 minutes prior and I had to put all my focus and attention on keeping Sirocco on course as we were surrounded by reef and rocks on each side. The waves were so large that I chose to stop looking back at them as Sirocco surfed down each one. Never once did I feel any fear or anxiety, instead I was overcome by intense focus and adrenaline. Kyle encouraged me saying that I was doing a great job and to keep our heading. He was ready to start the engine in case of an emergency, but it was clear that the boat was under control. And just like that, 5 minutes later we were in the calm protected waters. “Wow. That was intense and fun!” I said to Kyle, finally letting my breath out. He gave me a high five and said that I did a great job navigating. I felt pretty proud of myself 🙂 We turned left and made our way towards the Rose Island anchorage. It took a few tries, but we got the anchor down securely and Kyle dove it to make sure it was set correctly as we knew some heavy winds were coming in the following day.

The next few days were spent exploring the nearby islands. Something that I have really grown to love: exploration. For the past 6 years Kyle and I have spent a vast majority of that exploring. Whether backpacking, taking a boat down the river, sailing, or road tripping we often find ourselves in places we have never been before. And each time this happens, we get to explore. One of the dictionary definitions of explore is: “to traverse or range over (a region, area, etc.) for the purpose of discovery.” I like this definition because I find it relatable. All these new places we explore and we discover. I never know what is going to be around the next bend. What is down that road. Over the hill. On the other side of the island. Across the beach. Below the water’s surface. Each place is new and each horizon is new. It provides so much discovery and always keeps me guessing and wondering. Sometimes I get home sick for family and friends and community. But more often I feel grateful to get to truly explore. One day while at Rose Island we went to the small island across from it and walked around. We knew nothing about the island or what we would find. It was a small island and there was nothing on it, or so we thought. We were walking the rocky outer shoreline and came to some dock pilings. “Someone tried to build something here,” Kyle said as he walked closer. And then we found a sidewalk- the most random sidewalk. Surrounded by rocks, sand, and trees, a sidewalk formed and followed the edge of the island. We followed it and I found myself laughing. Where were we going? Does this lead to something? It can’t lead to something, I can see the end of the island and there is nothing there! But we had no idea. The anticipation caused us to walk a bit faster and then… it ended. This nice, rather long, sidewalk that someone obviously spent time and money making just ended at some rocks and trees. “Well that was interesting,” I remarked to Kyle. The sidewalk, for whatever reason, really put this thought of exploration and discovery in my mind. It was a reminder of why we are out here. Life is short and uncertain, and I want to spend it discovering places, things, and people that I didn’t know before. Soak up all the experiences and opportunities I can so that when it is my time to go, I feel fulfilled that I was able to see the world.

The following day we went to Rose Island and went on a coconut hunt. A few hours later we were rowing back to the boat with 1 opened coconut and 2 unopened coconuts. Finally! After all that talk in the Berry Islands about coconuts, we were both craving one and we finally found plentiful coconut trees. We were so excited about the coconuts that even though we didn’t have any tools, Kyle smashed the coconut on some rocks to get it open. We were able to drink fresh coconut water and eat fresh coconut meat while standing on the shoreline, listening to the waves crash on the sandy and rocky shore. It was a beautiful shore too, vast and the water so clear. 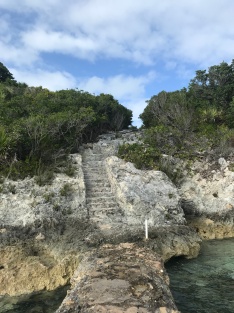 After a couple days we left Rose Island and motor sailed to Nassau Harbor. And my goodness what a change of world that was. We had been sailing around these mostly deserted and inhabited islands for weeks and hadn’t seen many other people or boats. As soon as we were within 2 miles of Nassau Harbor we were on our toes. Boats of all shapes, sizes, and speeds were going in every which direction. We had to call Nassau Harbor Control and state our intention for entering the harbor and let them know we were already checked into the country. Once we got the OK to enter the harbor, we dropped the sail and motored under the bridges. Huge mail boats, barges, and ferries motored past us. Fancy houses and condos lined the shoreline on one side and marinas and more run down buildings on the other side. Atlantis Resort towered over us as we motored by and entered the anchorage area. Six huge cruise ships docked right in front of us. I felt so small! We laughed at the change of pace and felt huge relief once the anchor was dropped.

The following few days were spent in Nassau Harbor at the same anchorage. Our days consisted of exploring Nassau, hiding from the rain and high winds in the boat, watching movies, baking cookies, listening to Christmas music, and doing boat projects. We were both really looking forward to my parent’s arrival and even rented a car to pick them up at the airport which was an adventure in itself, but I’ll save that for next time!

I hope everyone had a happy happy New Year!! 🙂